Flux / Slope is the time derivative of the signal. In DatLab, Flux / Slope is the name of the pull-down menu for (1) normalization of flux (chamber volume-specific flux, sample-specific flux or flow, or flux control ratios), (2) flux baseline correction, (3) Instrumental background oxygen flux, and (4) flux smoothing, selection of the scaling factor, and stoichiometric normalization using a stoichiometric coefficient. 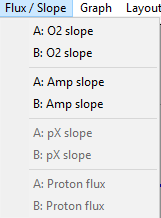 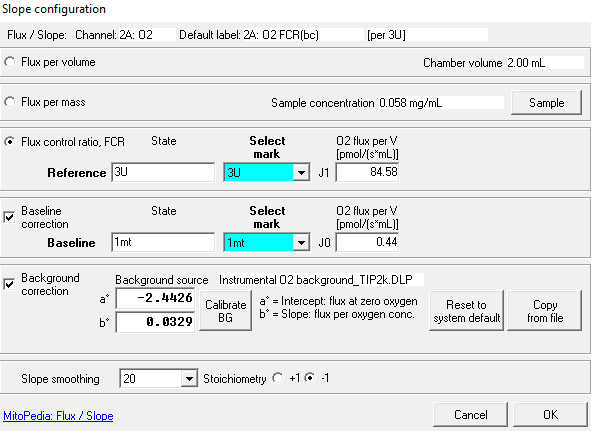 In an ideally closed chamber the external fluxes are zero, thus the concentration changes are exclusively due to (internal) transformations, which are chemical reactions. Then respiratory flux expressed per unit of chamber volume can be calculated from the slope of oxygen concentration over time (Gnaiger 2020).

For the oxygen channel, X=O2, cO2 is the oxygen concentration [nmol/mL = µmol/L = µM], dcO2/dt is the (positive) slope of oxygen concentration over time [nmol/(s · mL)], νO2-1 = -1 is the stoichiometric coefficient for the reaction of oxygen consumption (oxygen is removed in the chemical reaction, thus the stoichiometric coefficient is negative, expressing oxygen flux as the negative slope; Gnaiger 1993), and SF=1,000 is the scaling factor (converting units for the amount of oxygen from nmol to pmol).

A Savitzky-Golay smoothing filter is used in DatLab as a basis for calculating the time derivative (Flux / Slope) of the signal (oxygen, fluorescence, ..).

For each signal channel, the signal for the measured substance X is typically calibrated as an amount of substance concentration, cX [µM = nmol/mL]. The signal of the potentiometric channel, however, is primarily expressed logarithmically as pX=-log(cX/c°) and then transformed to cX. The slope is calculated as the change of concentration over time, dcX/dt [nmol· s-1· mL-1]. In a chemical reaction, the change of substance X is stoichiometrically related to the changes of all other substrates and products involved in the reaction. If the stoichiometry of the reaction is normalized for substance X, then its stoichiometric coefficient is unity and νX equals 1 if the substance is a product formed in the reaction, but νX equals -1 if the substance is a substrate consumed in the reaction. Oxygen is formed in photosynthesis and νX=1 when expressing photosynthesis as oxygen flux. Oxygen is consumed in aerobic respiration and νX=-1 when expressing respiration as oxygen flux.

If the sample itself introduces a constant flux in a baseline state (indicated as subscript 0), which is not considered to represent the metabolic reaction, then a flux baseline correction (bc) may be applied by subtracting the baseline flux, JV,0, from the total flux:

In an experimentally closed chamber, external fluxes due to diffusion or convection into or out of the chamber are minimized, ideally to zero. Unavoidable external fluxes are corrected for, as they are side reactions due to the measuring system, such as oxygen consumption by the oxygen sensor or chemical background effects due to autoxidation of chemical components added to the medium. These external fluxes and side reactions of the experimental system are lumped together in the background flux, J°V,X. A Instrumental background oxygen flux is applied to the total slope, to obtain the metabolic flux, JV,X, describing the experimental reaction under investigation:

In order to apply the instrumental O2 background values click on Calibrate BG button in the Slope configuration window. If the linearity, intercept (a°) and slope (b°) values are acceptable click on “Calibrate”. Apply the background correction by ticking the box “Background correction” and then press OK in the Slope configuration window. If this is done while DatLab is connected to the O2k, the information will be saved for the next experimental runs.

Eqs(1) and (2) describe the dynamics of X per unit volume.

Flux control ratios are dimensionless, using a reference flux for normalization. The reference flux is determined in a metabolic reference state (1) as internal mt-marker (Gnaiger 2020),

Smoothing in Flux / Slope: The default setting of Slope smoothing is 40 data points, i.e., 40 data points or an interval of 80 s at a data recording interval of 2 s are used for calculation of a non-linear fit, from which the slope is calculated for the current data point. 40 is used for O2 calibration and instrumental O2 background tests. 20 is recommended for data recording and analysis in typical SUIT experiments. When a larger noise is observed particularly in experiments with permeabilized muscle fibers, an increase to 25 displays more representative traces.

Flux may decline over time, due to (1) loss of respiratory capacity within a respiratory state when the properties of the sample are not stable, (2) reversible oxygen limitation in the closed chamber, (3) an overshoot directly after re-oxygenation, or (4) a slow response to an inhibitor. Flux may increase over time due to (1) a slow response to the addition of ADP or a fuel substrate, or (2) an undershoot observed in rare cases after re-oxygenation. An extended time interval is required for recording flux in a particular respiratory state, if (1) flux increases over time (this may take >30 min, with a mark set at the final steady-state), and (2) flux shows high levels of noise (then 10 min may be required for setting a mark).

In a SUIT protocol each titration can be considered as a transition between a background state and a reference state, expressed as a flux control efficiency. A sequence of steady-state states can be analyzed in terms of flux control ratios, FCR, corrected for a common baseline, and normalized for flux in a common reference state. If a steady-state (constant) flux is not reached between sequential respiratory states induced by titrations, corrections for dynamic changes of flux as a function of time may be applied, else the conditions for steady-state analysis break down. In such cases, step analysis with continuous evaluation of a change of flux (second-time derivative) may provide the only reliable information. In reality, some noise or bias is included in steady-state analysis above a threshold level, below which such data sets would be excluded from the steady-state analysis.

How to Analyze with DatLab 7.4

How to Analyze with DatLab 7.4

1. Calculation of the theoretical chemical fluorescence background of the Amplex UltraRed assay using MiR05-Kit supplemented with the iron chelator DTPA

The chemical fluorescence background slope of the AmR assay is linearly dependent on the oxygen concentration in the O2k-chamber in MiR05-Kit with or without DTPA. The following equation shows/expresses the relationship between these above-mentioned parameters:

Based on this, an oxygen correction factor (FO2) can be calculated:

Having the FO2, theoretical chemical fluorescence background slope can be corrected for the oxygen concentration:

The theoretical chemical fluorescence background slope is subtracted from the raw fluorescence slope (not calibrated for H2O2) using AmR assay with biological sample.

Sensitivity refers to the response obtained for a given amount of analyte and is often denoted by two factors: the limit of detection and the limit of quantification. Sensitivity is expressed in [V/µM] and calculated in DatLab 7.4 in the ‘Amp calibration’ window after H2O2 calibration was performed: open menu [Calibration] and ‘A: or B: Amperometric,Amp’.

The baseline state is pre-set for each SUIT protocol available at the template.

The H2O2 flux/O2 flux ratio gives us information about the relative contribution of H2O2 production relating to the respiration, or other words, how much oxygen of total oxygen turned over is consumed for H2O2 generation.

The specific fluxes corrected for the baseline are not used for this ratio, because the baseline state for H2O2 flux and O2 flux calculations might be different depending on the protocol.