Event: Proceedings of The Physiological Society

Mitochondria generate ATP via oxidative phosphorylation though the electron transport system using carbohydrates, fats and amino acids as substrates. The adult brain has a high rate of oxygen consumption but little is known about mitochondrial function in the brain before birth. In the immature brain, mitochondria appear to be involved in regulating inflammation, synaptic development and connectivity in addition to ATP generation. The aim of this study was to examine the ontogenic changes in mitochondrial respiratory function in the cortex and cerebellum of fetal sheep. All experiments were carried out under the Animals in Scientific Procedures Act (1986). Ewes and fetuses were euthanised (200mg/kg sodium pentobarbitone) at 103-105 days of gestation (d, n=3 ewes) or 140-145 d (n=5 ewes, term is ca. 145 days). Samples from the frontal cortex and cerebellum were placed in ice-cold biopsy preservation medium before undergoing homogenisation in mitochondrial respirometry medium, for the assessment of mitochondrial function using a substrate-uncoupler-inhibitor titration protocol (sequential addition of pyruvate: 5mM; ADP: 10mM; glutamate: 10mM; succinate: 10mM and rotenone: 0.5µM) and an Oroboros Oxygraph respirometer. Cytochrome C (10µM) was used to confirm mitochondrial outer membrane integrity. Respiration rates were corrected for protein concentration, measured using the bicinchoninic acid (BCA) protein assay. Statistical significance was assessed by a two-way ANOVA with post-hoc Tukey test. Pyruvate-supported LEAK respiration (data not shown) and oxidative phosphorylation (following ADP addition; Fig. A) did not alter significantly between the two ages in either the fetal cortex or cerebellum (all p>0.05). In the cerebellum, complex I and II-supported oxidative phosphorylation rates, as well as maximal oxidative phosphorylation (complex I+II), significantly increased from early to late gestation (Figs. B, C, D, p<0.05). In the cortex, complex II-supported oxidative phosphorylation and maximal oxidative phosphorylation rates increased during gestation (Figs. C & D, p<0.05). Oxidative phosphorylation was greater in the cerebellum compared to the cortex both early in gestation and towards term (all p<0.05). In conclusion, mitochondrial respiratory function can increase by as much as two-fold towards term in both the frontal cortex and cerebellum, with the cerebellum showing a 50-85% greater respiratory capacity compared to the cortex. 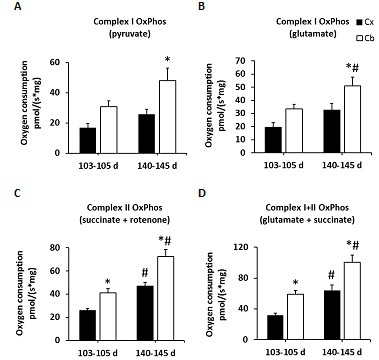